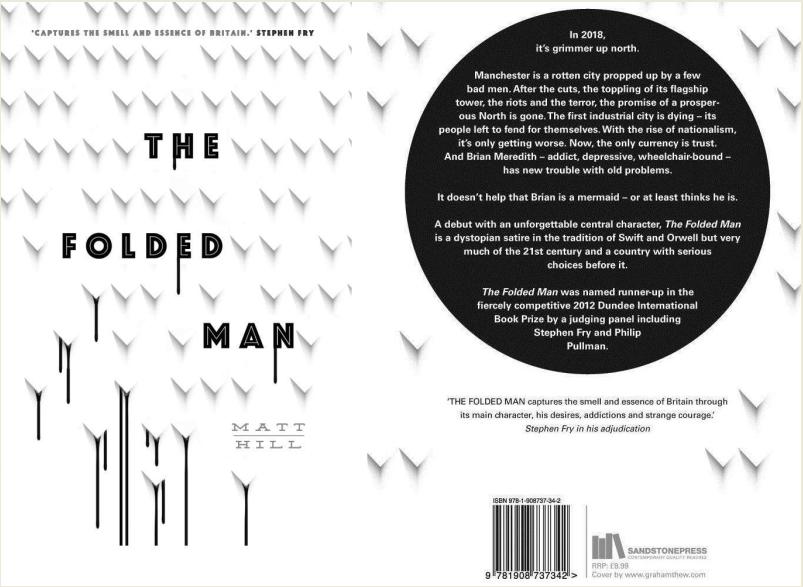 In 2018 Manchester is a rotten city propped up by a few bad men. After the cuts, the toppling of its flagship tower, the riots and the terror, the promise of a prosperous North is gone. The first industrial city is dying, its people left to themselves, and with the rise of nationalism, it’s only getting worse. Now, the only currency is trust, and Brian Meredith – addict, depressive, wheelchair-bound – has new trouble with old problems. It doesn’t help that Brian is a mermaid – or at least thinks he is.

The Folded Man was runner up in The Dundee Book Prize, and Stephen Fry himself said “the book captures the smell and essence of Britain.”

So, my expectations were high.

I was blown away.

Books lately seem plastered with quotes from other authors and the press, who throw words around like extraordinary, vivid and original; but the books never are.

The Folded Man is all three, and more.

I finished The Folded Man in four days because I couldn’t put it down.

I read in a coffee shop in Bermondsey, sitting back frequently to mull over the ideas the writer was putting into my head.

The little snippets of delightful descriptions, twists of phrases and turns of wording; of which there are many.

Matt Hill has one seriously distinctive voice, he’s set The Folded Man in an image of Britain around the corner from here…The events, the people, the life and the living it are so accessible the reader breathes in the smoke from the flames, and touches the fear of the character’s lives slipping away.

Brian is disabled and a bit of a mermaid, of sorts. He has his addictions, he wants to be left alone to rot; but then in this place nobody seems to get what they want.

The Folded Man is worthy of any accolade you wish to throw at it; five out of five stars, ten out of ten whales, thirty out of thirty golden bookmarks – if you are looking for an original voice, this is it.

Thank you to Sandstone Press for supporting an original author, in a literary land top heavy in Katie Price autobiographies.

The Folded Man is a must read.

A put whatever book you are reading down and start reading this book instead book.

And that, is exactly what you should do.

What others are saying…

‘The Folded Man captures the smell and essence of Britain through its main character, his desires, addictions and strange courage. Written with direct vividness that keeps one inside its totally realised world.’ –Stephen Fry

‘The rhythmic writing style is perfect, and some scenes are so brilliantly dark, perverse and engaging that your skin tingles with excitement.’ –The List

About the Author (taken from Amazon)

Matt Hill was born in 1984 and grew up in Tameside, Greater Manchester. After completing a journalism degree at Cardiff University, he trained as a copywriter. Matt currently lives and works in London.

Here is that link again – buy The Folded Man here, from Amazon/also available from all good book shops:

3 thoughts on “A review of The Folded Man”