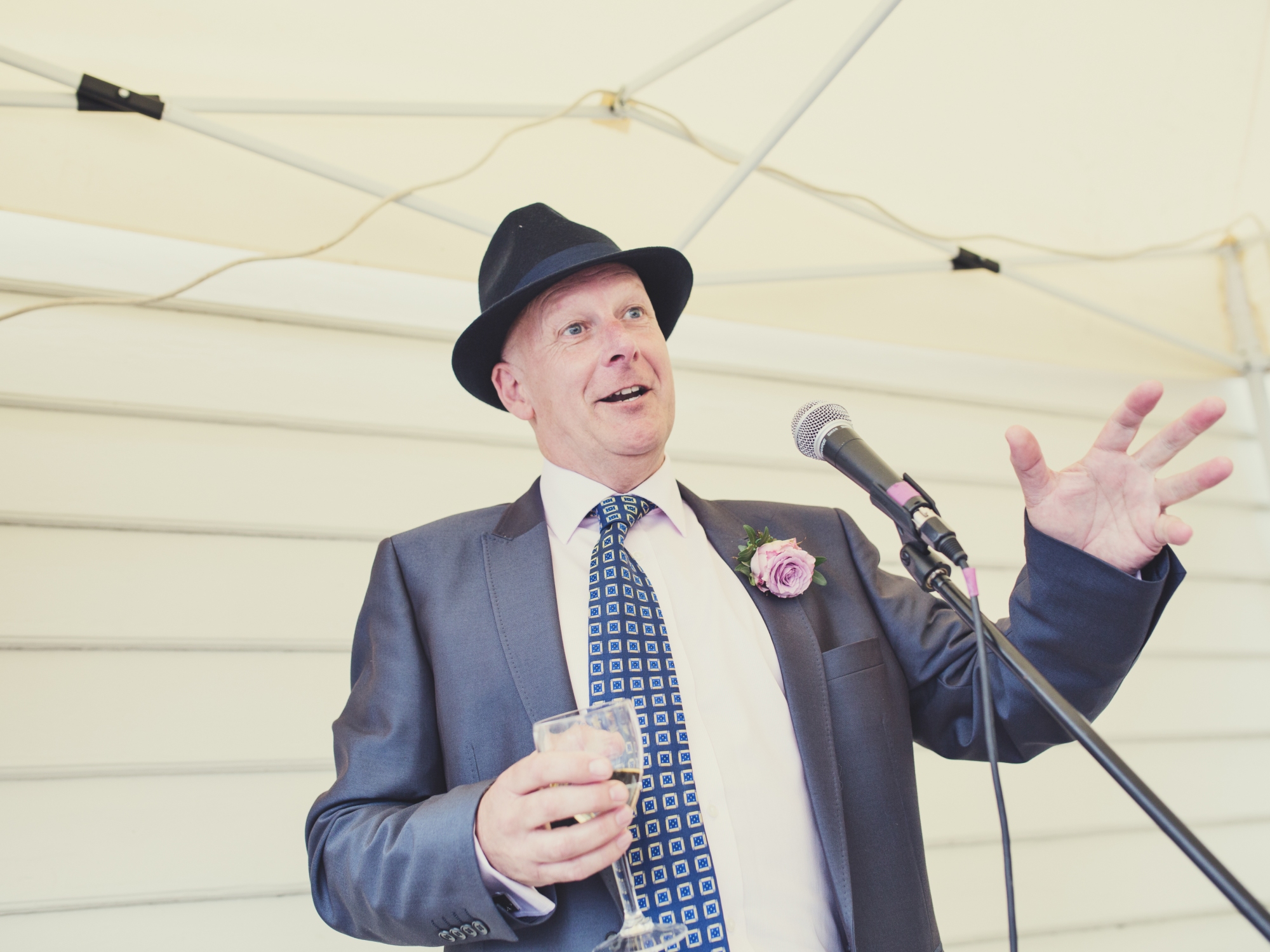 I would often sit four feet from my dad but feel like I was miles away. He would sit in his chair, stoic, silent, plucking his last eyebrows from his head, making the occasional noise as his brain folded over in thought. He was much like his father, who had fought in World War 2, presumably had put bodies in the dirt and had then returned a ghost of himself. To talk to my dad, it was often necessary to leave conversation cabbages around him, and bit-by-bit he would slowly come out of his shell. I don’t say this as a criticism, it was just who he was to me; and of course to others he may have been a raconteur, like he’s being in the main pic* on my wedding day. Yes, to some he was surely the man who would never shut up, but to me he was often silent – then again he had a lot on his mind. Perhaps he was preparing us all, withdrawing his voice before the rest of him followed.

Dad was a policeman in the Met for twenty years but only once did he speak of his time as an officer to me. He was dying, and the morphine had taken over his mind and pushed away his normal reserve. He recalled the time a delivery driver handed a pizza to a high-rise in Plumstead, and the guys who opened the door took the pizza, and then threw the delivery guy over the 5th-floor balcony. The young driver died. A life snuffed out, just for doing his job. He recalled being cornered by ten football hooligans, and escaping in the final moments when a police dog grabbed one of the men by the testicles, which seemed to sober everyone up. He recalled a level of violence most of us will never see, so he kept the memories to himself.

Odd things happen to the dying, and they all seem to revolve around the living. One excitable doctor had heard that my dad was terminal, and decided to talk to Dad at length about how wise my dad was, and how brave. He asked my dad about the meaning of life, and spoke about how forever can be a second, and eternity a blink of an eye. But the doctor had made an assumption; that my father had accepted his own demise, when at this point he had not. The young doctor had wanted to talk to a dying man, but witnessing the conversation proved to me that death is not in a spreadsheet or a chart; death is not a matter of science. The paperwork said terminal, my father’s facial expression said I’ll be there when I’m ready.

My father took his death how he had taken the events of his life – as a protector. As a father who refused to beg at the feet of Death for mercy, as a husband, friend, brother and son who refused to show pain so that others would feel less of their own. He taught me how to face death with dignity. And he knew I wasn’t the only person watching.

Watching is a curious way to pass the time, but when someone is diagnosed with a disease that is going to take them away forever, that’s really all anyone else can do. So we all sat around, watching. Now, today, in the place where my dad once was; the chair, the room – in this place, nothing has changed. The chair, the wall, the coffee table, these features are all still watchable. But he, the gravity that pulled it all together and made it a world, is missing.

He won’t be drunk. He won’t be silent. He won’t fall asleep in front of a James Bond film or tell me for the 500th time that there’s nothing like Spaghetti Bolognese. He won’t be sitting in his chair, four feet from me, but somehow seeming miles away. We are left with an indent in his favourite chair, the coffee table, and his favourite cup with the red bus from London on it.

And across the country and the world this Christmas, in millions of homes there will be empty chairs where the missing once sat. Chairs where dads, mums, wives, husbands, brothers, sisters, sons and daughters have all left their own impressions. The unmissing will light candles, we will remember the lessons passed down and on, we will recall the paper Christmas hats, the cracker jokes and the beautiful silences. We will remember times where everything felt complete and try to ignore the regret that comes from the understanding that completion is a feeling that can only be felt when it’s no longer possible.

The eternal gift from the missing is to remind the living that Christmas isn’t really about being thankful for what we have, it’s about being thankful for what we don’t. Most of us don’t have tubes sticking out of our arms, most of us aren’t bald from cancer treatment, most of us aren’t trapped inside our own minds trying to figure out how to encapsulate the message of the universe into one single, memorable sentence to say with our last breath for our children to hold and take with them through life.

The missing can’t stay up late and wrap a bike, or work tirelessly for weeks to create the best wrestling ring from an old apple box found in a bin behind the local Co-Op in Bexleyheath – but the missing, the missing give us the best present of all. They give us perspective. They remind us that we are weak, brittle and that life will one day be taken from us. They remind us that this Christmas, and every Christmas, we should celebrate life with the people we love before they are no longer sitting in their favourite chair, before all that is left is a coffee table, a cup with a red bus from London on and the memories.

Ultimately, that perspective is something to be grateful for, because after the tears and the candles, we are alive. And we go on for us.

And for as long as we can, we go on for them.

4 thoughts on “Christmas and the gift from the missing”